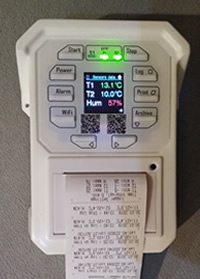 • It measures and records temperature of two sensors in the refrigerant volume
• It measures and records relative humidity of the air in the refrigerant volume
• It reacts and records access to the cargo compartment through a PIR sensor
• Bright luminous signalization of the face panel for access to the cargo compartment
• It records GPS coordinates, speed and course during motion
• Two-colour, light signalization for Upper or Lower limit of temperature
• Light and sound signalization for Upper or Lower limit of humidity
• A button for selection of a light or sound signalization on the face panel
• A button for turning on of WiFi for 5, 15 or 30 minutes on the face panel
• Buttons for Start and Stop for control of the records
• Buttons for Log, Print, Archive for selection of the printing
• An automatic Start of a record upon exceeding the set speed in km/h
• Auto Stop recording when max. number of reports
• Graphic presentation of the two temperatures for the last 15 minutes
• Coloured dots on the graphics of the two temperatures above the alarm levels
• А coloured, analogue clock. An automatic leafing through of the screens in 8 seconds
• An automatic scanning of the available sensors in every 3 minutes
• Personalization through WiFi – company’s name, lorry’s number, driver, country
• Settings and personalization via every smart device with WiFi
• Settable time interval for record - 5, 10, 15, 20, 30 minutes, 1 hour, 2 hours
• An automatic synchronization of the clock from GPS with selection of a time zone
• It prints a finished protocol on a thermal paper out of a built in thermal printer
• It prints settable options: GPS coordinates, speed, alarms as per limits
• It prints previous records of transportation with leafing through of the whole archive
• Digital sensors in the refrigerant volume in protected boxes with neodymium magnets
• A two-colour light emitting diode indication of the sensor boxes at alarm levels

Cargo Log Master temperature recorder measures, indicates and records temperature, humidity and motion out of digital sensors, installed in the refrigerant volume of a bus, lorry or a trailer. The data is visualized on a coloured, graphic display in figures and graphically. It is provided with GPS and can record coordinates upon every event – start of a record, stop of a record, start and stop of the power supply, change of settings.

The temperature recorder’s display turns automatically in every 8 seconds the working screens with the whole available information from the sensors. It can be leafed through manually by two buttons under the screen. The temperature of two sensors is indicated in green colour, when the value is between the set Upper and Lower limit. If some of the measured temperatures exceeds the set Upper limit, it colours in red. If the temperature is reduced under the set Lower limit, it colours in blue. The indications for the humidity in the refrigerant volume are analogous. The two temperatures for the last 15 minutes are depicted graphically on a separate screen, where they are also coloured in the respective colours. For an easily observation of the face panel from a distance above the display there are luminous, two-colour, light emitting diode indicators with green and red colour, which are set in motion upon crossing the limits of each of both temperature sensors. It can be selected which alarm to generate also a sound signalization by a separate button on the panel.

There are two buttons for start and end of a record for transportation on the face panel – Start and Stop. A record can be started manually by a button in a selected moment or to be set to start while moving with speed, set in kilometers per hour from the menu for settings. The record is stopped manually by a button with continuous pressing, in order to be prevented accidental pressing. If while a record is on the power supply of the temperature recorder grows weak, the record shall continue after restoration of the power supply. There are indicated symbols for a pause or a twinkling dot on every screen in compliance with the regime – stopped or started record.

In the set of Cargo Log Master temperature recorder is included a PIR sensor, which is installed in the refrigerant volume. A registration of a man’s motion is indicated by a red light emitting diode indicator above the display of the face panel. The indication remains lit 120 seconds after the registered motion and is reflected in the protocol with the written temperatures and humidity.

Cargo Log Master Temperature recorder has a built in printer with thermal paper. It can print 'Moment record', which contains data for temperature from both sensors, humidity, condition of the PIR sensor and GPS coordinates, if they are allowed for printing. A detailed 'Record for transportation', containing all reports from the beginning of the record, is realized only by two pressings of buttons on the panel. The leafing through of all previous records from the memory of the temperature recorder is accompanied by detailed information on the display for the exact date and hour of start and stop, as well as the number of the recorded reports. The thermal printer is fast and noiseless. Each print contains the set: Company’s name, Lorry’s number, Driver’s name and serial number of the temperature recorder, as well as the set levels for an Upper and Lower limit of temperature and humidity. The events of crossing the set limits are printed with a different symbol. It is selected which events to be recorded and/or to be printed from the settings menus.

We do not resell foreign controllers, systems and devices! All electronic modules of the displayed products were invented by Bisser Systems EOOD in Varna, Bulgaria. We maintain our systems and are proud of their long-standing and uncompromising work. Some of the developments are in series production by other companies, which is why we support the Bulgarian production. Many of the products are not shown due to the express desire of our customers.